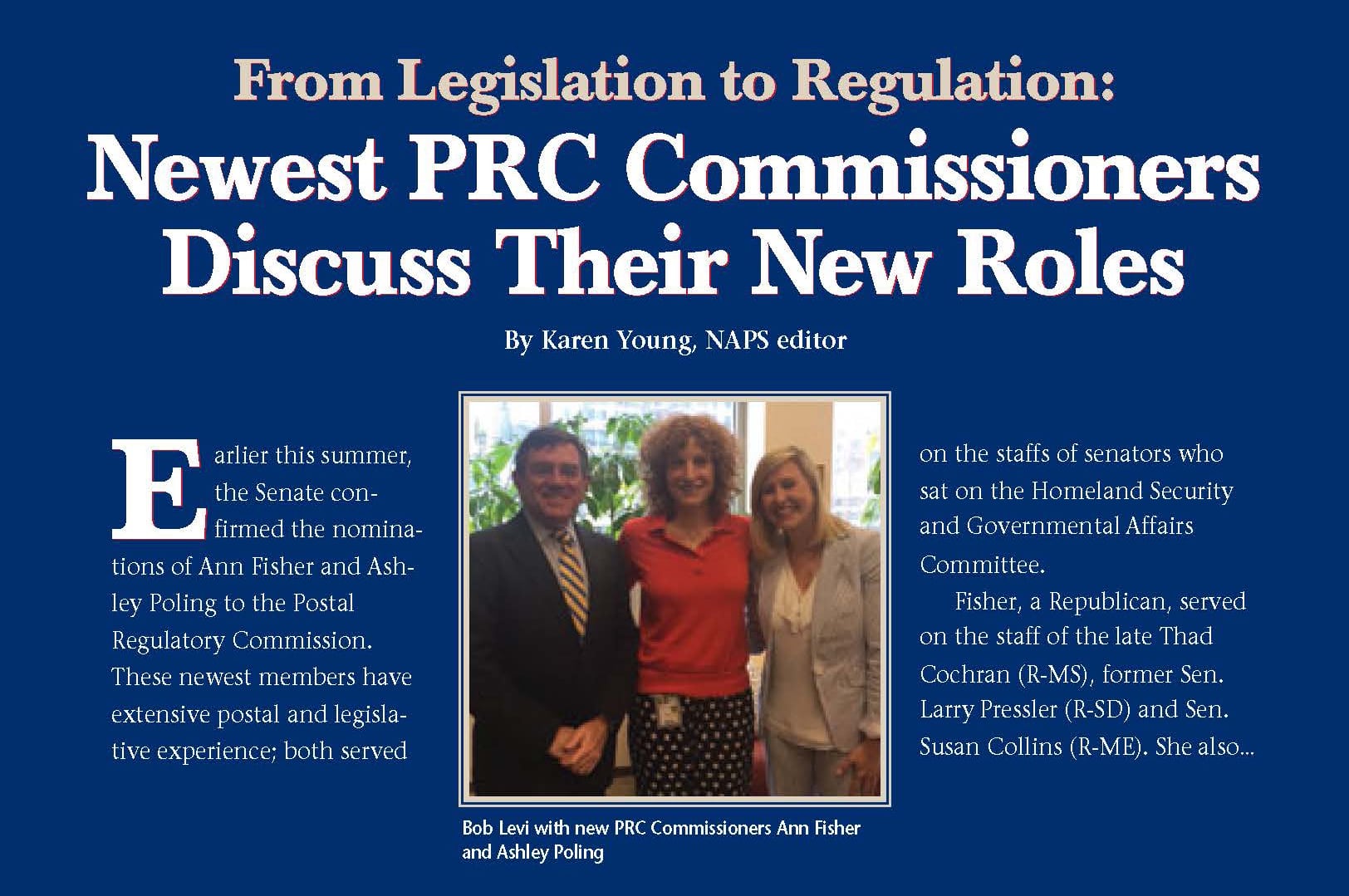 Earlier this summer, the Senate confirmed the nominations of Ann Fisher and Ashley Poling to the Postal Regulatory Commission. These newest members have extensive postal and legislative experience; both served on the staffs of senators who sat on the Homeland Security and Governmental Affairs Committee.

Fisher, a Republican, served on the staff of the late Thad Cochran (R-MS), former Sen. Larry Pressler (R-SD) and Sen. Susan Collins (R-ME). She also worked in the Postal Service’s Government Relations Department and, for the past 12 years, at the PRC. At the confirmation hearing, Fisher was introduced by Sen. Tom Carper (D-DE).

NAPS Director of Legislative & Political Affairs Bob Levi interviewed the new commissioners on Sept. 12 for his weekly NAPS Chat podcast. He asked the women how it felt to be introduced at their confirmation hearing by a member of the opposite party. Fisher said it was an honor to have been recommended by Carper. Poling said it was unique, but shows that postal issues are bipartisan issues; they touch everyone across the country, no matter the party.

“It’s symbolic of how important this issue is for everyone,” she said. Fisher and Poling were referred to by Carper and Meadows as experts in the postal field, which can be considered a rather “boutique” area of legislation. Levi asked how working in the Senate prepared them for their new positions.

Fisher agreed that postal legislation is a niche area. “There are not very many of us in this area who develop legislative experience to a great extent,” she affirmed. Poling said working on the Senate Homeland Security and Governmental Affairs Committee throughout her congressional career gave her the opportunity to develop expertise and specialize in postal issues.

“Having legislative experience is a wonderful skill to have when you are in the weeds of developing legislation,” she explained. “Having meetings with postal stakeholders and congressional members and their staffs, I got to hear what mattered to people across the postal community.”

Levi asked what is unique about the Postal Service that necessitates having a regulator. Fisher said Congress created the PRC as part of the 1970 Postal Reorganization Act to ensure the Postal Service was legally setting rates. “We have an important role overseeing the pricing of market-dominant products in the USPS,” she said.

Levi referred to Poling’s comments during her testimony at the confirmation hearing regarding the PRC’s function of overseeing accessibility and service performance of the agency. He asked how she sees the PRC taking an active role in ensuring the USPS’ performance is up to the standards the American public expects and deserves.

Poling responded that one of the PRC’s responsibilities is monitoring the Postal Service’s compliance and ability to met service performance targets. “That’s something I worked on a lot when I was in the Senate and was passionate about,” she said. “Working on that in a legislative context made me realize how important that issue is. I now have a very different role. I’m interested in seeing if the PRC can make sure there is accountability and transparency.”

Levi said transparency and accountability dominated a lot of the conversations at the confirmation hearing. He pointed out that, historically, the accuracy of data the Postal Service has provided has been called into question. He asked if the PRC has a role in ensuring accuracy of data provided to the legislative body.

Fisher said it’s up to the USPS to ensure the data provided to Congress is accurate. “What is often the case,” she explained, “is Congress may come to the PRC seeking a second opinion. But when the PRC is requesting data or when it’s formulating the annual compliance determination, then we expect accurate and complete data.”

Levi asked if the PRC has a role in developing postal legislation.

Fisher said the PRC does not play a role in developing legislation, but is there to provide analytical information to legislation being considered. “In general,” she said, “Congress will take something an interest group or the USPS has drafted as legislation and ask us for technical advice. But we don’t lobby; we’re not allowed to lobby. Our guidance is technical.”

Poling added that one of the strategic goals of the PRC is to have more engagement with Congress. “I think that’s fantastic,” she added.

“Having a postal community in contact with each other and collaborating to the extent they can always is a good thing. I agree it’s not our role to develop legislation. If someone reaches out to us to weigh in technically on something, that’s where the PRC would play a role.”

Levi raised the issue of updating a survey done in 2008 relating to the universal service obligation (USO). At the confirmation hearing, Fisher suggested the PRC may revisit the scope of that obligation. It may be time to find out what Americans want or need, which would be part of developing a new, comprehensive approach to what the USPS is. “There’s no definition in statute,” Levi affirmed. “Rather, it’s operationally defined. How would the PRC approach that exploration?”

“This is overdue,” Fisher declared. “It’s time for a full discussion and thorough examination of all issues related to the USO. I was glad to see the president’s task force [on the postal system] get into this and start to lay out some different ideas. That’s not saying I agree 100 percent or completely disagree with the recommendations, but I appreciate the fact they tackled some of these issues.

“At the time of the 2006 Postal Accountability and Enhancement Act, Congress asked the PRC to do a large report on the USO and the two monopolies and issue their recommendations to Congress. That was a fascinating undertaking. Unfortunately, nothing was done with it once the report was sent to Congress. And, at the time, I didn’t think large-scale changes were needed.

“But now, the time is ripe for a discussion of those issues. My hope is, time willing, the commission will be able to possibly update its 2008 report or, if not update, have some other involvement. I would like to work again with the USPS and Congress to advance some considerations as they relate to the USO. I don’t know the best way to get at this, but I suggested, off the top of my head, a nationwide survey to find out what people want. I think if you ask the everyday person what they need and must have from the Postal Service, the answers will be quite different from what you heard in 2008.”

Levi suggested it’s possible that if a survey were conducted today, there would be different needs from different parts of the country. People who live in downtown Manhattan have different needs than those who in live in Yankton, SD—where Fisher is from.

Fisher said her father, who is 85 and lives in Yankton, watched her confirmation hearing on his computer. “He discussed ideas I brought up at the hearing with me,” she shared. “He didn’t think five-day mail delivery was a bad idea and had no issue with opening up the mail box to other responsible parties. My guess is there are a lot of other people now who might think differently about these issues.”

Poling added that it’s important to get a sense of what matters to different people in different parts of the country. “And I don’t know if you can generalize and say one area needs something another area doesn’t,” she suggested. “But, from my experience spending a lot of time in North Dakota and Montana, there is real reliance on the mail in those areas because it’s accessible and affordable for everyone. A lot of small businesses are really reliant on the Postal Service.

“It’s something you have to really think about because in some of these places, post offices are central to the community. But I also think a lot has changed in the past 10 years. It’s never a bad thing to get a current sense of what people are using the agency for and what they need. It’s important to stay in touch.”

Levi referred to a question during the confirmation hearing regarding why it’s taking so long to enact postal reform, which Poling attributed to a lack of consensus among stakeholders. “As we get closer and closer to meaningful legislation,” Levi pointed out, “the fissures become larger.

“One of the third-rail issues is the USO and six-day mail delivery. The House has a resolution to maintain six-day and door delivery. Each resolution has overwhelming support. You have that political pressure on one side as you explore the USO and, as Fisher suggested, if you ask, there may not be as definitive an answer as we think. How do you achieve consensus when there are such diametrically opposed views?”

Poling explained that, in working on legislation, people are very passionate about their interests. With postal legislation, it takes a lot of iterations. “I don’t know if there’s anyone out there who expects to be happy with the final product. You try to find the best compromise you can and work through issues that arise.

“Often, you might think you’re introducing a bill on a certain day, but, at the last minute, something comes up on which you have to engage. But, you have to stick with it because it’s a service to the American customer and Congress is who represents them. It helped me to think about that as we pushed through some marathon sessions, at times, to get bills introduced.”

Levi moved to the subject of the PRC’s 10-year rate review and implementing a new rate regime that would ensure postal viability. At the confirmation hearing, Fisher said the review should have been done much sooner—perhaps five years out because of the recession, mail diversion and the issue of prefunding. The commission is well beyond the 10-year mark now, but one reason for not being ready to implement was the lack of a full complement. Now, the PRC is complete with five commissioners. “Is there a timeline for implementation of a new rate regime?” he asked. “The USPS is waiting, as well as the mailing community and revenue needs of the agency.”

Fisher said she made clear at the hearing that she thought the PRC needed to move forward as expeditiously as possible. “There is a tremendous amount of work that goes on by the PRC staff to pull all this together,” she stressed. “We were stalled with four commissioners. With the addition of a fifth commissioner, we’re able to move forward. I can’t tell you exactly when the public will see something, but I can say we are moving forward. The staff’s intention is to get this back in the hands of the commissioners for review again as soon as possible.”

Levi thanked Poling and Fisher for joining him for the NAPS Chat. He said NAPS looks forward to continuing working with them in their new capacities.