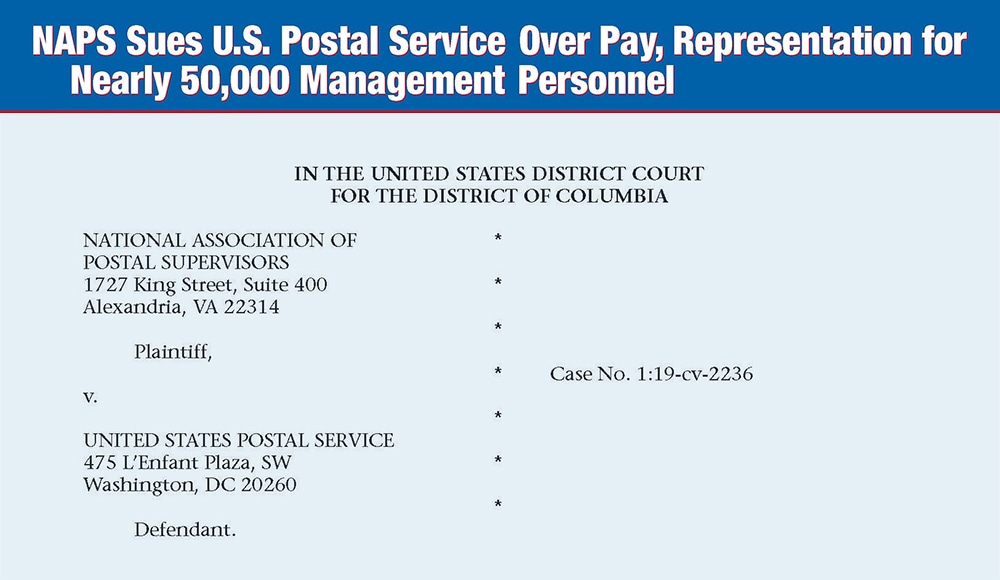 The NAPS Executive Board met via teleconference on July 26, 2019, to discuss NAPS representation issues and the final USPS May 15, 2019, EAS pay decision. All board members were present.

WHEREAS, The National Association of Postal Supervisors (NAPS) during 2017 and 2018 sought to consult with the U.S. Postal Service to achieve a fair and reasonable FY16-19 EAS pay decision, and

WHEREAS, The USPS rejected most of the findings and recommendations of the April 30, 2019, report of the fact-finding panel convened by the Federal Mediation and Conciliation Service to review the EAS pay decision, and

WHEREAS, The Postal Service failed to recognize NAPS as the representative of all USPS EAS Headquarters and area personnel and to consult with NAPS on their pay and benefits in connection with the EAS pay decision, and

WHEREAS, NAPS’ membership includes at least 20% of EAS postmasters and the USPS has denied NAPS’ right to represent postmasters over pay and benefits in consultation with USPS under 39 U.S.C. § 1004(i)(4), therefore be it

RESOLVED, That the Executive Board of the National Association of Postal Supervisors authorizes the association to initiate legal proceedings against the U.S. Postal Service and pursue all declaratory and injunctive relief necessary to correct the above-described failures of the Postal Service to properly administer EAS pay and recognize NAPS’ entitlement to represent all EAS employees, including postmasters and Headquarters and area personnel.

On Friday, July 26, 2019, the National Association of Postal Supervisors filed a complaint in federal district court seeking declaratory and injunctive relief against the U.S. Postal Service for its failure to pay its supervisors, managers and other professional and administrative employees in accordance with federal law, which, among other things, requires compensation comparable to the private sector and an adequate differential in pay between supervisors and the clerks and carriers they supervise.

NAPS also asked the court to overturn the Postal Service’s refusal to recognize the rights of postmasters and Headquarters and area personnel to be represented by the association. NAPS filed the lawsuit in the United States District Court for the District of Columbia following unanimous approval of the action by the NAPS Executive Board.

The lawsuit follows the Postal Service’s rejection of most of the findings and recommendations of a fact-finding panel convened by the Federal Mediation and Conciliation Service at the request of NAPS to review the 2016-2019 pay package issued by the Postal Service in 2018. The panel found that EAS compensation is not comparable to private-sector compensation, that the pay-for-performance system is “seriously flawed” and that the current Supervisor Differential Adjustment is unreasonably calculated and inadequate.

NAPS’ lawsuit seeks retroactive pay to compensate all EAS-covered employees at levels equal to comparable private-sector positions from Oct. 1, 2015 (the start of the 2016-2019 pay package) to the date of the court’s final judgment in the matter, along with other relief to align EAS pay policies with what the law requires. In addition, NAPS seeks declaratory relief recognizing its right to represent all Headquarters and area EAS personnel and all postmasters who are members of NAPS.

“The USPS pay system for its managers and supervisors is broken and inconsistent with the expectations of the law,” said Brian J. Wagner, NAPS president. “Given continued USPS resistance to the fair administration of the law, we have no choice but to seek the relief to which all supervisors, managers and post-masters are entitled,” he said.