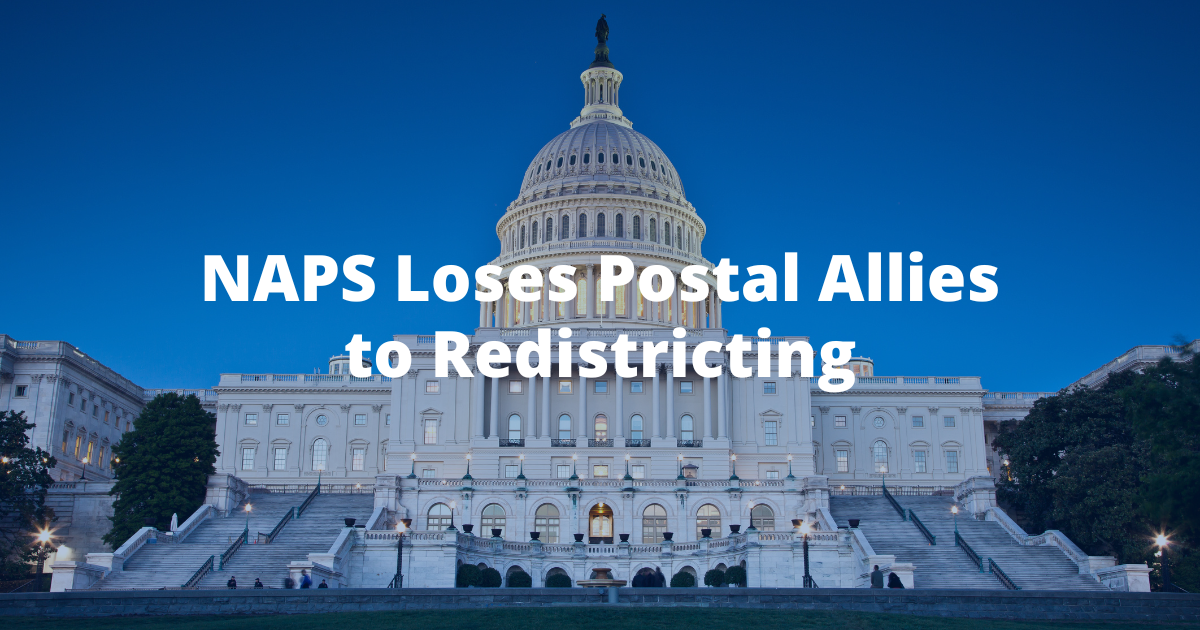 Postal and federal legislative activities for the next congressional session, which begins January 2023, already have been significantly impacted by once-a-decade congressional reapportionment. A number of postal and federal employee allies were drawn into districts whose lines are foreign to them or have been challenged by congressional colleagues—many from their own party. In a few weeks, one such contest will take place in New York City.

First, some background. Congressional apportionment is the highly contentious, constitutionally mandated process of allocating the 435 House of Representative seats among the 50 states. The decennial U.S. Census is used to determine the number of House seats for each state.

As a result of the 2020 Census, Colorado, Florida, Montana, North Carolina and Oregon each gained one seat; Texas picked up two seats. On the other hand, California, Illinois, Michigan, New York, Ohio, Pennsylvania and West Virginia each lost one seat. There was no change in the number of House members in the other states.

The redrawing of congressional district lines within each state is determined by state law, by a state-authorized reapportionment commission or, in some instances, by state courts. At times, lawsuits are filed to contest the redrawn lines on grounds of racial discrimination or hyper partisanship. Generally speaking, each congressional district within a state must have approximately the same number of people. However, as the result of the 2020 Census, Alaska, Delaware, North Dakota, South Dakota and Vermont each are allocated only one House member.

Drawing district lines is one of the most highly charged endeavors a state legislature undertakes. It can change or solidify the partisanship of a district. The new lines also can thrust two members of the House in the same or different political party in the same district or create a new district to which a local legislator can aspire. Reapportionment commissions and state courts can achieve the same results, although, arguably, not for partisan or personal reasons.

Redistricting in a number of states has led to congressional retirements or decisions by lawmakers to seek other elective offices. For example, strong postal ally and former USPS manager Rep. Brenda Lawrence (D-MI) and postal supporter Rep. John Katko (R-NY) announced their plans to retire at the end of this Congress.

Postal friends Reps. Tim Ryan (D-OH) and Val Demings (D-FL) are leaving the House to run for the Senate. As of June 30, 57 current members of the House will not be seated in the 118th Congress, which convenes the first week of January 2023.

A number of postal and federal employee supporters were cast into more ideologically partisan districts, which resulted in them losing their primaries. For example, Reps. Rodney Davis (R-IL) and David McKinley (R-WV) both were redistricted and forced to run in their primaries against incumbent members of Congress who were perceived to be more aligned with former President Trump. In both instances, the former president endorsed their opponents.

The loss of Davis could impact bipartisan progress on eliminating the Government Pension Offset (GPO) and Windfall Elimination Provision (WEP). Davis has been the prime Republican proponent of eliminating the GPO and WEP as author of H.R. 82, the Social Security Fairness Act. As of June 30, the bill had 281 cosponsors.

The loss of McKinley could impact bipartisan efforts to advance due process rights for postal managers. McKinley introduced H.R. 1624, the Postal Employee Appeal Rights Amendments Act, which would provide approximately 5,000 Headquarters postal managers with the same right to appeal adverse actions to the Merit Systems Protection Board as other postal managers.

Possibly the most consequential primary for the postal and federal community will be decided later this summer on Aug. 23. As the result of a New York State Court of Appeals decision to assign a “special master” to craft the state’s congressional district lines, two senior members of the New York delegation who chair powerful House committees will face one another in the Democratic primary.

The court rejected lines crafted by the New York legislature, deeming those lines too partisan. Consequently, House Oversight and Reform Committee Chairwoman Carolyn Maloney is competing with House Judiciary Committee Chairman Jerrold Nadler to represent New York’s 11th Congressional District. Maloney’s 2020 primary challenger also is in the race and could be a factor as to who prevails.

It is important to note that without Maloney’s leadership, it is doubtful the Postal Service Reform Act (Public Law 117-118) could have reached the desk of President Biden for his signature. In addition, Maloney has been a long-term, outspoken opponent of postal privatization and relaxation of the USPS Private Express Statutes that protect the sanctity of the mailbox.

Should Maloney lose the primary to Nadler, the top Democratic slot on the committee with jurisdiction over postal and federal employee and retiree issues would be vacant. Potential Democratic successors could be Reps. Eleanor Holmes Norton (DC), Gerry Connolly (VA), Stephen Lynch (MA) or Jamie Raskin (MD).

Of course, should Republicans win a majority of the House seats in November’s general election, Rep. James Comer (KY), Maloney’s partner in authoring the new postal law, would chair the Oversight and Reform Committee.