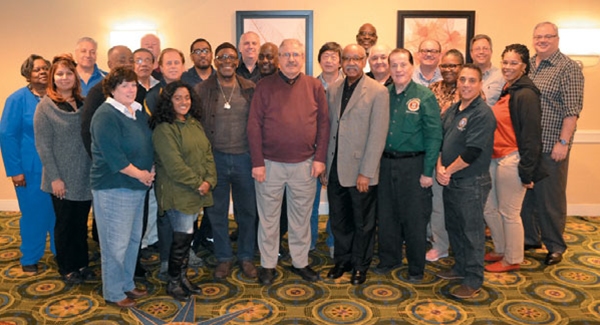 I want to wish everyone a very happy and joyous holiday season and a happy, healthy and prosperous New Year. Please remember this holiday season that family always should come first—enjoy!

The midterm elections did not offer any surprises. As predicted, the Democrats regained the majority in the House and the Republicans retained control of the Senate. Despite these results, we need to prepare and move forward educating the freshmen representatives and senators and all our elected officials to focus on the needs of NAPS members and the Postal Service.

One major issue we need to address and put to rest is protecting the retirement benefits of all federal employees. This is or should be a concern of all postal employees, whether active or retired. We need to protect the benefits that were promised to us when we took this job! This should be a non-negotiable issue.

Each branch legislative chair (with some branches deciding to have two or three chairs) were given a binder containing all the information needed to conduct a visit with their representatives, as well as the “Do’s and Don’ts” regarding SPAC and the Hatch Act. A detailed section also was included with all the information of each representative: their bios, office locations, committees and the caucuses on which they serve and the neighborhoods (ZIP codes) they represent, as well as their photos. The attendees found this training extremely educational.

It was great to see new members become involved with NAPS. As branch legislative chairs, they feel it is a position of interest and enables them to be involved in NAPS. Legislation is a major part of the work that NAPS does, but, at times, seems to be forgotten.

Special thanks to Long Island Branch 202 President and Legislative Chair Tom Barone. Following the training, he held a cigar bar night that raised $325 for SPAC. All attendees were urged to raise money for SPAC. Thanks to Tom for grabbing the baton and moving forward!

I am writing this article to urge allbranches to get involved in legislation. We should not be sitting back, waiting for someone else to do it and, one day, discover it’s too late to do anything. We must be proactive if we want to protect our benefits.

Participating in the yearly Legislative Training Seminar is great, but we all need to do something in addition to LTS. We need to visit our representatives in their home offices and let them see the faces who cast the votes that elect them to office.

I wish everyone a safe and joyous holiday! Remember—family first. We need to protect our benefits as that is what protects our families.