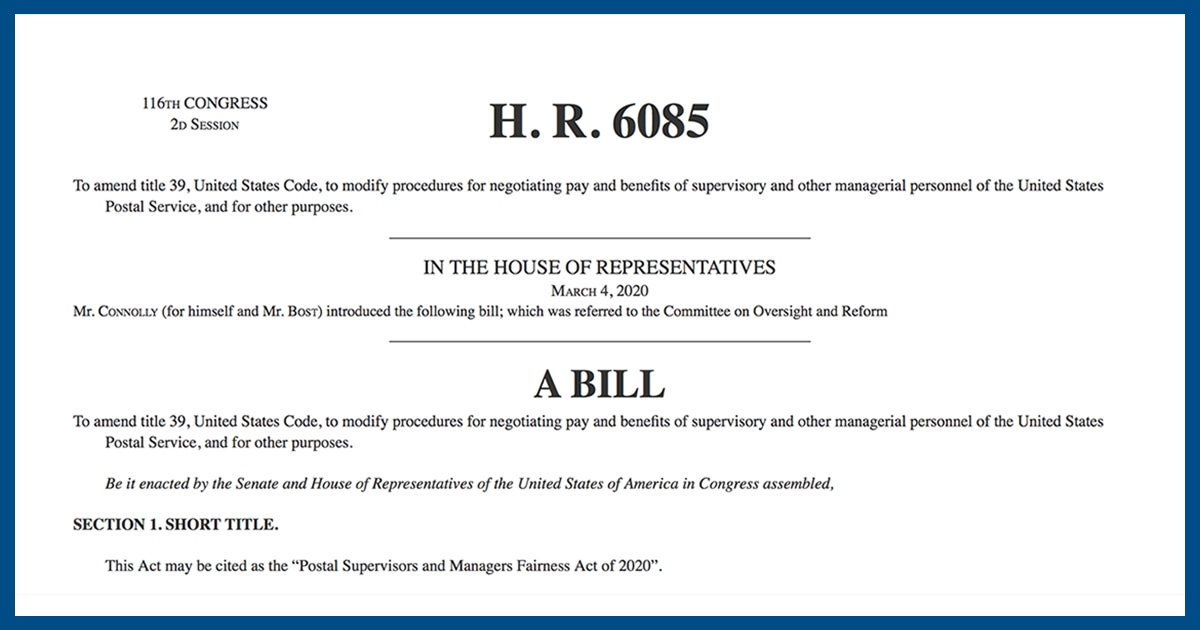 116th Congress -- During a question-and-answer period at the 2020 Legislative Training Seminar (LTS), a delegate asked Bob Levi to provide the background on how H.R. 6085, the “Postal Supervisors and Managers Fairness Act of 2020,” was developed. Levi explained that, after the Postal Service rejected the independent fact-finding panel’s decisions, the resident officers decided to investigate a legislative option so they would not again find themselves in this situation.

In late June, early July, Butts, Levi and Bruce Moyer, NAPS’ legal counsel, sat down with legislators, including Rep. Elijah Cummings, then chairman of the House Oversight and Reform Committee, and representatives from Rep. Gerry Connolly’s (D-VA), Rep. Stephen Lynch’s (D-MA) and Rep. Brenda Lawrence’s (D-MI) offices. He said they discussed the problem NAPS was confronting: There is a statutory process in place and the Postal Service was found by an independent Federal Mediation and Conciliation Service panel to have violated the law. The Postal Service rejected the panel’s findings.

“We were compelled to go to federal district court to enforce the findings and find that the Postal Service violated the law,” Levi said. “But, in tandem with that, we wanted to go to Capitol Hill to look to the future.”

He said they sat down at the first meeting where staff members asked NAPS to flesh out exactly what they needed in a legislative bill. During the summer, Butts, Moyer and Levi, with outside counsel that represented NAPS in the lawsuit, compared notes and developed a strategy with talking points. They then went back to the same principal staff persons with whom they met earlier in the summer and provided the talking points and a concept of the legislative product.

During the fall, there was give and take—continuous back and forth between NAPS and Capitol Hill. In the meantime, tragically, Cummings died. The new chair would be Rep. Carolyn Maloney.

In October, Moyer and Levi were invited to a group meeting with Maloney on Capitol Hill. The meeting was supposed to start at 8 a.m. “Bruce and I met with soon-to-be chair Maloney at 7:30 that morning and sat with her for the better part of 30 minutes and explained what we needed and what we were going to do,” Levi said. “We asked if we could count on her support. She indicated she would be supportive of however we were going to proceed with our legislative remedy.”

After that meeting, Levi said they reported back to the members of Congress and staff with whom they previously had met that the new Oversight and Reform Committee chair was supportive of NAPS’ efforts; at that point, everything congealed. “We went to Connolly with the actual ‘wants’ or ‘asks’—that is to have an expedited start to the consultative process and a proposal in which the findings of a three-member fact-finding panel would become binding,” he explained.

While that was going on, NAPS President Brian Wagner and Dan Rendleman approached Rep. Mike Bost to ask him to consider being a Republican champion of the legislation. Connolly, who took up the bill for NAPS as chair of the subcommittee with jurisdiction over the Postal Service, is a Democrat. “We felt it would be advantageous to have bipartisan legislation,” Levi said.

Wagner and Rendleman reached out at numerous opportunities with Bost and made the case to him. Butts and Levi met with Bost and his chief of staff in late fall to ask if he would be willing to be an original cosponsor of the legislation to be presented by Connolly. Bost responded, “When you have the draft of the bill, give it to me.”

Fast forward to December, NAPS had the final draft of the legislation and presented it to all parties. “At that point, we knew Connolly was going to introduce the bill and we knew Bost was going to be supportive,” Levi affirmed. The bill had to be tweaked a couple of times.

The final incarnation of the bill, maybe three or four weeks ago, came back from Connolly’s office and was presented first to Butts, then to Wagner and Mulidore. It was shared with Moyer. “We said, ‘Yes, this accomplishes what we need,’” Levi said. “We went back to Connolly’s staff and said, ‘This is it. We would like the bill to be introduced prior to our Legislative Training Seminar.’”

Then, a couple of weeks ago, Wagner and Levi met with Bost. Wagner had a draft of the legislation and gave it to Bost. Within two days, NAPS got his signoff. He was prepared to be an original cosponsor of the legislation.

Levi said they went back to Connolly and told him they had a Republican cosponsor and asked if it could be introduced on Wednesday, March 4. NAPS got the heads-up that Wednesday was going to be the day. Late Wednesday afternoon, the bill was submitted by Connolly, with Bost as an original cosponsor.

“We didn’t get the bill number then,” Levi pointed out. “For some reason, I couldn’t sleep that night. At 3 a.m., I went on my iPhone to congress.gov and saw the bill number—6085. I texted Ivan, Bruce and Brian the bill number. A few minutes later, I got a text back from Ivan, ‘Yes!’”

“That’s the shortened version of how this bill happened,” Levi told NAPS delegates. “It demonstrates that it took a considerable amount of time and a lot of legwork by a number of people working on behalf of every person in this room.”

Before the afternoon session closed, Butts acknowledged Bruce Moyer—NAPS’ legal counsel, but who first started with NAPS as legislative counsel. He said Bruce was a stalwart in what he did for NAPS and the footprint he helped NAPS make in DC. “He’s a proven leader in this city when it comes to legislation,” Ivan said. “I want to acknowledge him and thank him for what he has taught me regarding legislation. Thank you, Bruce.”

In closing, Butts told delegates to get ready and get some rest to prepare for going up on the Hill the next day to take care of NAPS’ business. “This is what this is about: Taking care of our business! I hope you have a productive time up on the Hill.”

For more about the 2020 Legislative Training Seminar (LTS), click on the links below:

Do's and Don'ts of Conducting Visits with Lawmakers on Capitol Hill