August and September Board Meetings 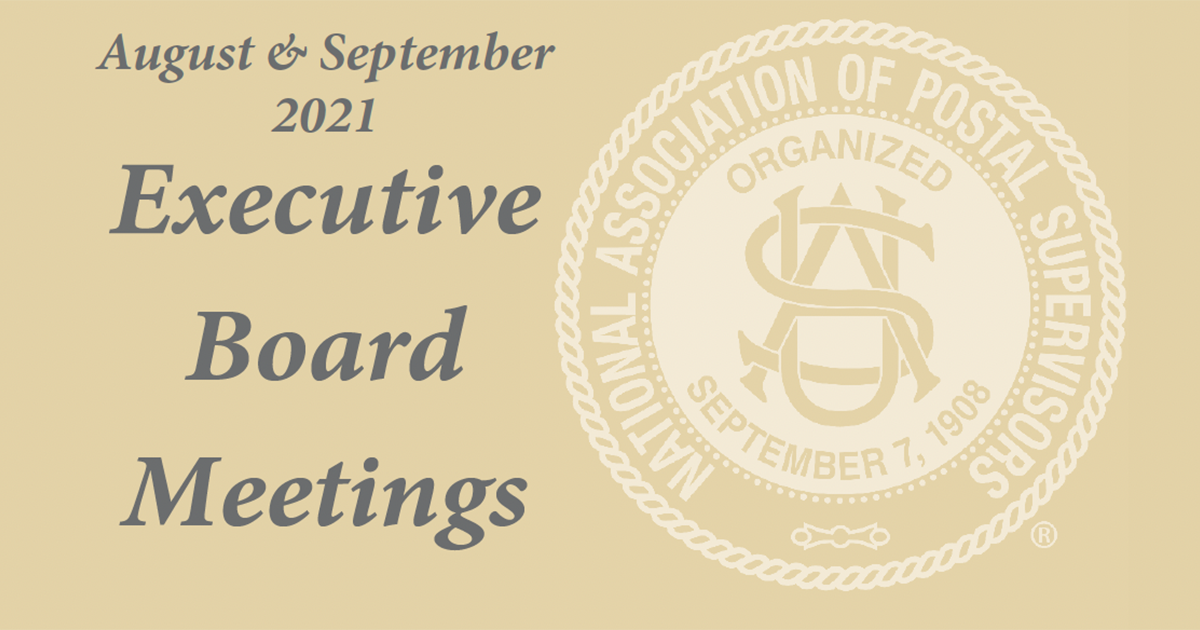 Mulidore conducted the roll call of officers; all board members were present.

NAPS President Brian Wagner said this meeting was bittersweet for him as it would be his last as national president. Regardless, Wagner said he was thankful the organization remains committed to moving forward on behalf of its members.

He acknowledged it has been a difficult year, as COVID has impacted many lives, as well as our organization and its members. Wagner predicted NAPSwould have a great convention week and emerge even betterthan before.

Executive Vice President Ivan D. Butts said it was great to see everyone together again for a board meeting, even as the challenges of COVID continue. “We must take the lead by wearing masks in order to stay safe and healthy,” he affirmed, “and provide the example for our members this week atthe convention.”

Mulidore told the board this past year has, indeed, been difficult. “But we remain strong and moving forward as an organization,” he stressed. “It has been an honor to serve as NAPS secretary/treasurer during these consequential times and working under Brian’s leadership and with the team at NAPS Headquarters.”

Ford welcomed board members and guests. He thanked the board members for their dedication to members during the challenges experienced over thepast year.

Bruce Moyer, NAPS’ legal counsel, provided the board with a confidential update on legal issues facing the organization, as well as the pay decision agreed to by NAPS and the USPS.

Butts and Director of Legislative & Political Affairs Bob Levi delivered a report on SPAC and a review of legislative, regulatory and political activities impacting NAPS members. The SPAC update for the national convention was discussed.

There was no old business or new business.

The dates for the fall Executive Board meeting are Oct. 17-20.

For the good of the association, Butts thanked Wagner for his leadership over the past years as national president.

Wagner said it has been a greatjourney and an honor to have been a resident officer for 11 years, the past five as president. He said he is looking forward to time with his family, but is honored to have helped so many.

Secretary/Treasurer Jimmy Warden conducted the roll call of officers; all board members were present.

NAPS President Ivan D. Butts thanked everyone for attending the abbreviated board meeting and welcomed new board members Bill Austin, Dee Perez and John Valuet. He thanked Lisa Douglas and Cindy McCracken for their service and dedication to NAPS. Butts also thanked Past President Brian Wagner for his years of dedicated service to NAPS.

Butts referenced establishing the joint USPS/NAPS work teams, part of the latest approved pay package, to help pursue change. Any board members wanting to be part of a work team were asked to send their names to Warden for consideration. Also, any nonboard member who may want to be considered as a subject matter expert and participate on a work team should send their name and area of expertise to Warden.

The Executive Board’s “Duties and Responsibilities” and “Ethics Guidelines,” copies of which were in each member’s folder, were discussed. Members weregiven a NAPS insurance beneficiary designation form to complete.

NAPS Legal Counsel Bruce Moyer stated there was no new information regarding the pending NAPS lawsuit since his update during the convention onThursday. Oral arguments are scheduled for Sept. 21.

Regarding the latest pay package, the process has been completed and the decision will be posted on the NAPS website. NAPS did not receive everything it requested, but was able to make some important gains. Two key elements were there were no give-backs and a change was made in the supervisor differential adjustments for SCSs and BMU supervisors. NAPS is looking forward to participating in the work teams as part of the pay decision. NAPS’ other issues will be addressed by the work teams.

Members will arrive Oct. 16 for the fall board meeting; the meeting will be Oct. 17-20, with departure on Oct. 21. Following the post-convention board meeting, the resident officers decided to have the three new members come in three days earlier for new-member training to save on travel expenses.

For the good of the association, Northeast Region Vice President Tommy Roma mentioned Puerto Rico as possibly competing to host the NAPS 2026National Convention. Construction has been completed on the hotels surrounding the convention center.

Butts briefed the board on staffing changes at NAPS Headquarters.

It was recommended to have the convention facility’s security officer brief the delegates. Plans should be made, but not limited to, evacuation routes, rallypoints, accounting for all delegates and accommodating delegates on scooters, as well as a plan to bring delegates back into the building, especially those in need of assistance as they exited without their scooters.

Scooters should be annotated as to whose scooter belongs to whom so they may be brought to the lower level. It also was noted there was a shortage of scooters; some members in need were unable to rent a scooter for the convention week.

All board accounts will be updated once all vouchers have been submitted.

There was a concern as to why some candidates’ banners were not displayed. It was recommended for future national conventions to notify all candidates regarding the display of banners. Options were discussed: If banners are displayed on both side walls, then each candidate may have two. If banners only can bedisplayed on the back wall, as they were at the Gaylord Texan, then, perhaps, candidates should be allowed only one banner.

Butts thanked all the board members for their work to help make the convention a success. He said he is committed, as he knows all board members are, tomove forward for the betterment of the membership. He wished everyone a safe trip home and said he is looking forward to seeing everyone again at the fall meeting.