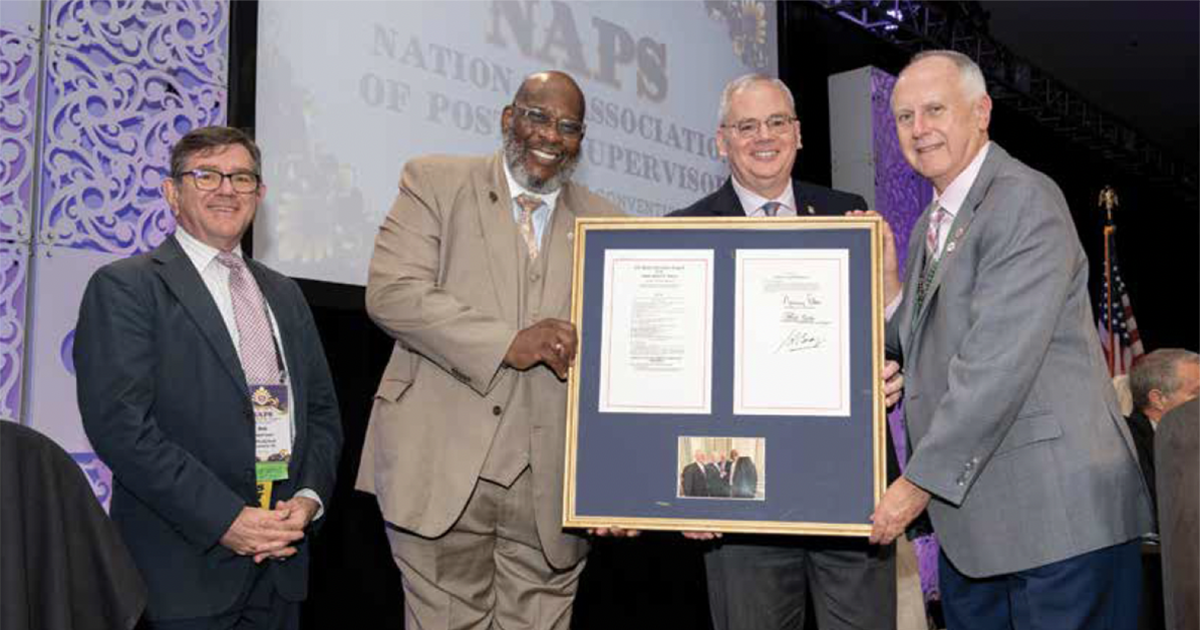 “I would like to express my sincere appreciation to the members of the National Association of Postal Supervisors for their hard work in helping to get the Postal Service Reform Act signed into law.

“Postal supervisors, managers and postmasters are essential members of the Postal Service who help sustain and enhance the Postal Service. I want to specifically thank NAPS Executive Vice President Chuck Mulidore and Secretary/Treasurer James Warden for their efforts to help pass the bill.

“I wish I could be with you in New Orleans to take part in your national convention, but, in recognition of your members’ efforts, I want to present the National Association of Postal Supervisors with a ‘redline’ copy of the Postal Service Reform Act, signed by the President, as it was conveyed to the National Archives for posterity.

“I look forward to continuing to work with the National Association of Postal Supervisors as, together, we strive to provide the American public with the high quality of services from the Postal Service they expect and deserve.”

The redline copy presented to NAPS by Maloney is the final version of the House- and Senate-passed bill, H.R. 3076, that was presented to President Joe Biden for his signature and bears the signatures of Speaker of the House Nancy Pelosi and President Pro Tempore of the Senate Patrick Leahy. It includes a “red line” bordering the text of the first and last pages of the passed bill.

Once President Biden affixed his signature to the legislation, the document, known as the “redline” of H.R. 3076, was immediately forwarded to the U.S. National Archives and Records Administration, where it was assigned Public Law 117-108.

This token of appreciation from Maloney, thanking NAPS members for their efforts in helping enact postal reform legislation, is framed with a photo of the NAPS resident officers and President Biden at the April 6 signing ceremony.

In honor of former Illini Vice Presidents Lorraine Henry (50-plus years as a NAPS member) and Dr. Nancy Wesley, South Suburban, IL, Facility Branch 493 has been renamed the L. Harry/Dr. N. Wesley Branch 493. Henry, with her daughter Toni Coleman-Scruggs and Branch 493 officers, came to the stage to accept this honor.

Executive Vice President Chuck Mulidore called Ford a great NAPS leader and presented him with a plaque with a gavel that reads, “in recognition of your tremendous service to the members of NAPS and for your leadership, dedication and commitment to our members.”

Ford told delegates, “This boy from Minnesota has been more places, done more things and made more friends from my membership in NAPS. None of this could have been done without the help of the Southern Region.”

Next to be honored was former NAPS President Louis Atkins. At NAPS Headquarters, former presidents Rubin Handelman, Vince Palladino, Louis Atkins and Ted Keating are honored with metal plaques in the Margarete A. Grant Executive Board Conference Room.

Executive Vice President Chuck Mulidore called Louis up on stage. “We thought it would be great to present you a picture of that plaque, along with your biographical sketch,” he said.

“It’s such a great honor to be a member of NAPS and to have friends and loved ones like you all,” Louis expressed. “I’ll always remember this day because this presentation was given to me right here in New Orleans; it means a lot! I’m grateful I have friends all over the country. Bonita and I love every one of you! You are our family.”

Phoebe thanked the resident officers for allowing them to take on this project. “So much has happened here in New Orleans from Hurricane Katrina,” she observed. “There are so many homeless.”

She referenced Yulonda Love’s message from Monday morning urging everyone to help someone. “I was astounded and elated when Yulonda gave that message,” she said. “This group of women, along with the Eastern Region, has given donations and, with our NAPS president, were able to put together the 300 dignity bags we dispersed to three homeless shelters on Saturday.

“This humanitarian effort was envisioned by Karen Douglas and Patricia Stevens. We pray and hope that, at the next convention, someone locally decides to do a similar project. “We gave the bags to a youth homeless shelter for children under 21 and a men’s and a women’s shelters. Thank you all for your donations and everything you did. Thank you, Ivan, for allowing us to do this.”

NAPS delegates next were treated to motivational speaker Greg Gray, CEO of Renaissance Unlimited, Inc. He talked about building relationships and to what people really listen.

“I’m excited to hang out with you,” he declared. “Most effective leaders are the ones who build relationships that are lasting. Great relationships are based on how well people listen and how much they care.”

Gray said that, when under pressure, people really listen to:

In other words, “93% has more to do with the boat on which the words float,” he explained. “If we don’t manage our tone of voice, we can’t manage our relationships. People assess our character by how we say something rather than what we say. Our relationships are built on mutual trust and respect—not on agreeing.”

He discussed ways to communicate in a variety of situations—phone calls, email, social media, texting and in-person and virtual meetings. “Look in a mirror,” he advised. “However you look is going to come across—whatever the environment. Remember, the entire world understands a smile.”

Salmon said his committee is committed to regular communication within the committee between conventions and with the Executive Board Postmaster Committee when important issues arise. “Let’s deal with those issues as they occur,” he urged. “Let’s communicate those issues to the Executive Board so they can be discussed during consultative meetings with the Postal Service.”

As of Tuesday afternoon, contributions at the convention to SPAC totaled $29,800. That total included a contribution of $10,002 from the Northeast Region in honor of NAPS Secretary/Treasurer Jimmy Warden.