Colorado-Wyoming Bi-State Terry G. Brady Memorial Branch 907 legislative chair Gary Roll was this year’s recipient of the Gold Standard and Legislative Leadership award. Roll, who joined NAPS in 1986, shared that politics always has been part of his life.

“Everyone in my family was informed politically and had strong opinions,” he said. “They tended to be more Democrat than Republican. One grandfather was a union railroad employee, the other was a small businessman. But they both loved Roosevelt and his New Deal. I remember following closely Harry Truman’s 1948 re-election campaign.”

Roll said when he found out NAPS lobbied lawmakers, he was all in. “I was lobbying my congresswoman for postal and federal employee issues before I ever went to LTS. I did this mostly on my own based on what I read in The Postal Supervisor,” he explained.

Roll became the Colorado-Wyoming legislative chair about 15 years ago. “It has become a year-round job,” he explained. “After LTS, there are follow-ups I do with everyone to whom we spoke in Washington. I ask all attendees to send thank-you notes. I also send thank-you notes because I have spoken to them when I scheduled the appointments and sent them the ‘Issues Brief’ before our meeting.”

Roll also tries to schedule meetings with lawmakers the Colorado-Wyoming delegation missed while in Washington. “After that, I keep in touch and send out information to both postal supervisors and congressional staffers about updates and new information,” he said. 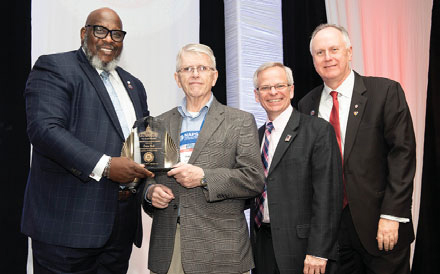