Once everyone was seated and were served their food, the meeting was called to order. Highlights included the officers’ reports on the 2018 NAPS National Convention. The consensus was it was a great convention; the accommodations, food and special events were great.

There was a lot of discussion and interaction, as well as many relevant resolutions on which to review and vote. There also was feedback regarding the Postmaster Committee and its recommendations. Delegates want to see more resolutions that directly impact postmasters.

Before the close of the meeting, I installed the 2018 officers: Michelle Salvador, president (she was unable to attend due to illness); Sharon Gishi, vice president; Carl Brown, secretary/treasurer; Mauricio Salazar, legislative rep; and April Trevena, sergeant-at-arms. Vontina Swygert stood in for Michelle. 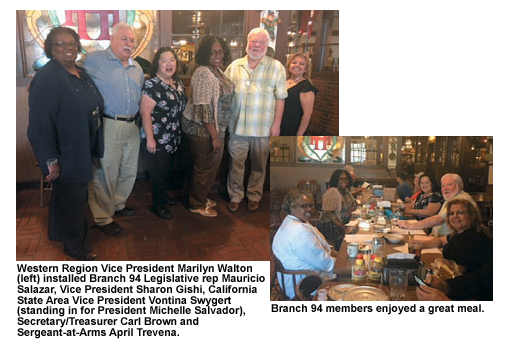