The first weekend in November, California State Executive Board members and guests traveled to Emeryville, CA, bordered by Berkley to the north and Oakland to the east and south, to review the Sonesta Hotel, site of the 2023 California State Convention. The Sonesta is adjacent to the scenic Bay Bridge that separates Oakland from San Francisco.

Members of the California State Board and Margarete A. Grant Host Branch 127 reviewed meeting space and sleeping rooms, including suites. The accommodations were approved and the state convention planning committee will finalize plans by January 2023 for the May 3-6 convention.

After the walk-through, NAPS Secretary/Treasurer Jimmy Warden, Pacific Area Vice President Chuck Lum and I attended the state board meeting. We offered updates and information from our recent fall NAPS Executive Board meeting.

Many branches joined the meeting via Zoom so more NAPS members could hear the latest state and national NAPS news. After the board meeting, I joined the Auxiliary to host a meet-and-greet reception at the hotel to wrap up the busy day.

I shared a legislative Update on H.R. 82, the pending WEP/GPO legislation that may get a vote in Congress’ lame-duck session. This legislation has been on the NAPS agenda for many years and would benefit Civil Service retirees who currently don’t receive a full Social Security benefit, despite having paid into the system.

Chuck Lum talked about the importance of everyone working to sign new members and encourage retirees to continue as associate members. The branch also welcomed former NAPS President Louis Atkins and his wife Bonita, National Auxiliary secretary/treasurer, who traveled from Louisiana to attend this special event.

This event was well attended; members representing Northern and Southern California branches traveled to the City by the Bay for the annual brunch. We enjoyed the beautiful setting overlooking the San Francisco waterfront, as well as good food, recognition, fellowship and fun. This was a great conclusion to a busy weekend in Northern California’s famous Bay Area. 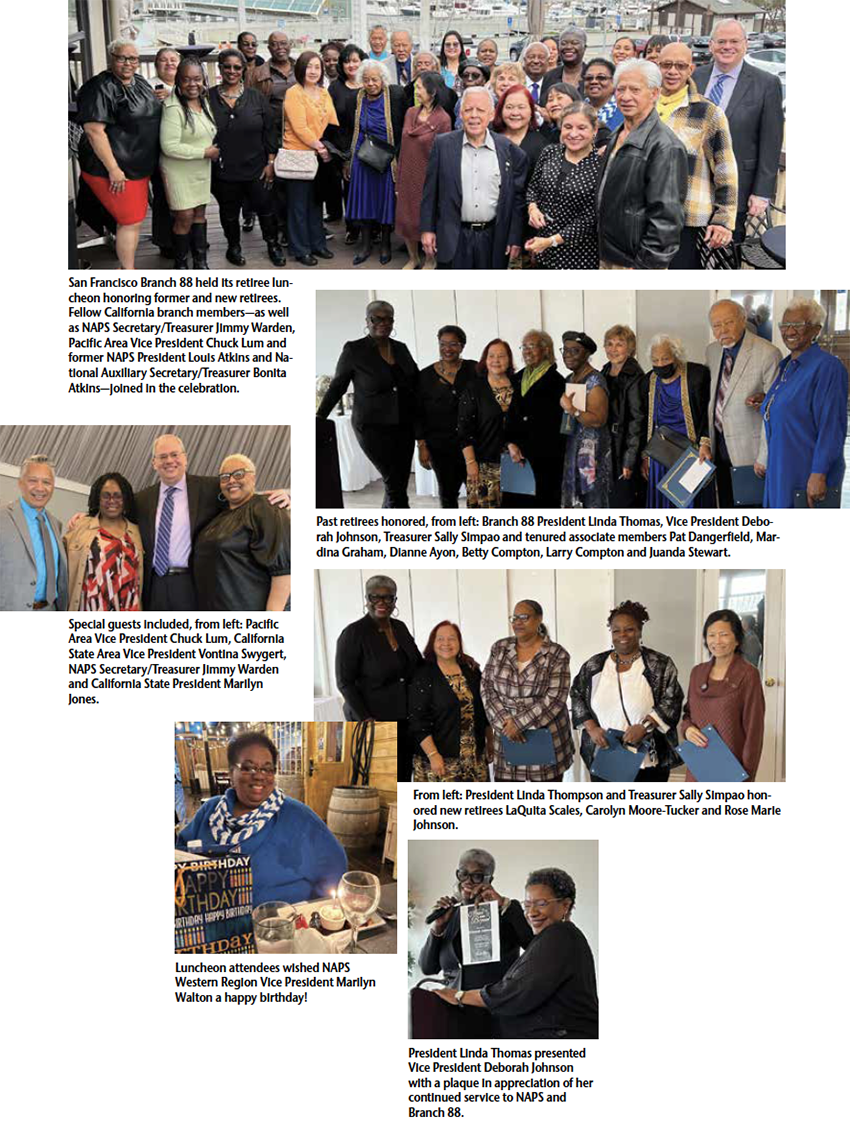