NAPS Leads the Way in the Fight for Fairness

In late February, my dad, a longtime postal retiree who served 30 years as an employee of the agency, died. Thank you to all the members of my NAPS family who extended condolences. Some of you may recall that in my first Postal Supervisor column in December 2018, I mentioned my dad’s relationship with his first supervisor—the beloved former NAPS president Ruby Handelman.

One of my vivid childhood recollections is walking a picket line with my dad and the family dog 50 years ago during the March 1970 postal strike. At that time, thousands of postal employees, including my dad, placed their livelihood in jeopardy by participating in that strike. That was a pivotal moment for rank-and-file employees.

No one will be asking NAPS members or other EAS-level employees to engage in any such action to secure a modicum of fairness in the pay consultation process. Rather, NAPS is requesting all EAS-level employees to join together in the legislative effort to improve the process by which supervisor and managerial compensation is decided. The NAPS legislative and legal teams have worked with our resident officers and allies on Capitol Hill to develop a reasonable approach to alleviate the dysfunction characterizing the current pay process.

Indeed, NAPS was pleased to engage Rep. Gerry Connolly (D-VA), House Oversight and Reform Subcommittee on Government Operations chairman, and Rep. Mike Bost (R-IL) in crafting bipartisan legislation to address multiple deficiencies plaguing the current pay consultations statute. As currently written, Section 1004 of Title 39 of the United States Code delays the start of pay talks until the largest postal union completes its prolonged collective bargaining, even if it extends to arbitration. Never mind that the lapsing EAS pay decision will have expired prior to the conclusion of collective bargaining.

In addition, current law emboldens the Postal Service to ignore or reject the findings of an independent fact-finding panel, which last year concluded that the agency actually violated the law. NAPS members only need look at last year’s pay decision.

Connolly and Bost recognized the unfairness in the process and worked with NAPS to address its deficiencies. As a result, on March 4, the congressmen introduced H.R. 6085, the “Postal Supervisors and Managers Fairness Act of 2020.” If enacted into law, the legislation would require EAS-level employee pay consultations to begin months before expiration of the lapsing pay decision.

EAS employees no longer would be captive to the protracted collective-bargaining timeline. In addition, the bill stipulates that if there was to be an impasse at the conclusion of consultations, the recommendations of the already authorized Federal Mediation and Conciliation Service fact-finding panel would be binding. The USPS no longer would be able to summarily ignore the findings of the independent, expert panel.

The proposed legislation in no way interferes with the pending judicial proceeding between NAPS and the USPS before the District of Columbia Federal Court. The pending NAPS-initiated legal case concerns past violations of the Postal Service. The just-introduced bill would cover future pay talks.

As you can imagine, promoting H.R. 6085 was a dominant theme during NAPS’ 2020 Legislative Training Seminar. LTS delegates scoured Capitol Hill to secure co-sponsors and support for this pro-postal supervisor bill. NAPS calls on all EAS-level employees to contact their members of Congress to co-sponsor and support the measure. In this way, we will be able to ensure that upcoming EAS pay talks will be fair and not suffer from the same difficulties as previous ones.

Another matter that commands our attention is the exclusion of the Postal Service from coverage under the new paid parental leave statute that provides a new benefit to most federal employees. The new law, included in a December 2019 Department of Defense authorization bill, provides 12 weeks of paid leave to federal employees on the birth, adoption or fostering of a child. Postal employees currently are covered under the broader Family and Medical Leave Act, which provides for unpaid family and medical leave.

One of the rationales for the USPS exclusion from the paid leave is that postal employees benefit from collective bargaining, so the leave can be negotiable. There are three problems with that pseudo-justification: the unions have not negotiated over such leave; there is the precedent of statutory, not negotiated, family and medical leave; and EAS-level employees do not collectively bargain.

With regard to NAPS members, argument for the latter reason is most compelling. It is unfair to hold EAS-level employees captive to a collective-bargaining process in which they cannot participate.

Finally, NAPS continues to aggressively oppose the administration’s proposed punitive retirement cuts, as well as ill-considered plans to undermine mail services that were included in the 2021 White House Budget submission to Congress. These proposals would lead to a significant decline in retirement annuities, pay cuts and reduced earnings in the Thrift Savings Plan’s G Fund.

Together, NAPS will lead the way in promoting postal supervisor and manager pay fairness, fighting for postal parental leave equity and opposing cuts to postal pay and benefits. 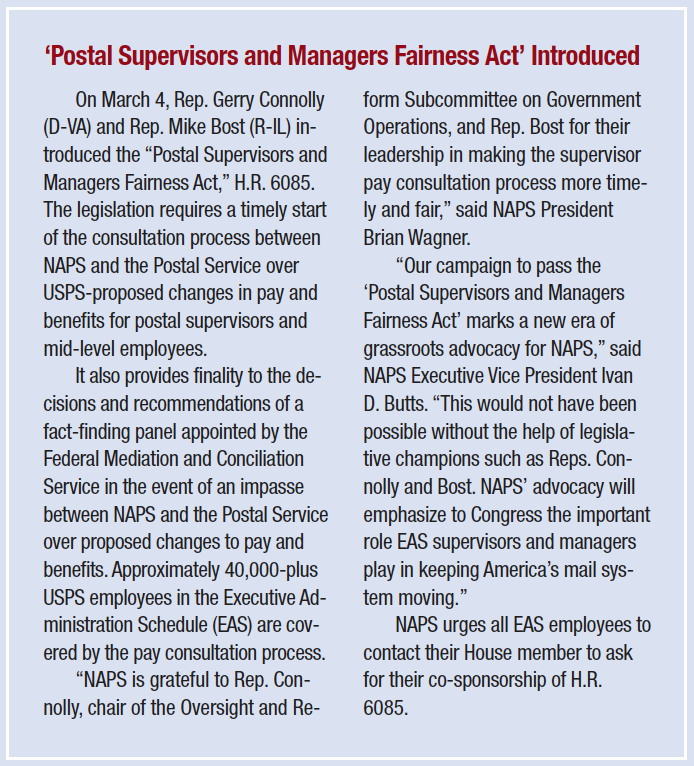