In preparing for this month’s column, I read an advertisement from the Vx Group whose trademarked motto is “Growth Is Good.” Vx believes that growth is driven by great vision, great programs and great people. The reason I was drawn to this company was a post on its website titled, “Five Reasons Why You Can’t Cut Your Way to Profitability.”

The company asserted that, from a financial perspective, making cuts can be a good thing if they are part of a long-term growth strategy. But, making cuts to achieve short-term profitability is a huge mistake! The five reasons are as follows:

3. Expenses are not always expenses. Often, they are investments.

4. Research and development initiatives come to a halt.

5. There’s a short in short-term for a reason.

Most certainly, not all of these five reasons fit into every Postal Service fiscal cut. However, in general, they suggest that cost-cutting efforts by the USPS could be more misguided than even I thought.

We recently have experienced the DUO process that helped the general deconstruction of mail service to America begin again. NAPS currently is assisting members navigate through the Supervisor, BMEU USPS RIF avoidance process. The Huffington Post has revealed that the Postal Service wants Congress to help it make significant cuts to employee benefits as part of a plan to balance the agency’s books.

This would be accomplished by slashing an estimated $18 billion of employee compensation over a decade by shaving paid leave, raising workers’ share of pension contributions and shifting new employees into less-secure 401(k)-style retirement plans. We have seen enactment of POStPlan and the closing of over 13,000 community post offices, as well as millions of dollars lost in the subsequent award by Arbitrator Goldberg.

As the EAS employees charged with delivering America’s mail, we have had to endure massive closures of processing plants, which has shrunk the USPS infrastructure to a level where it’s unable to react to most routine mail fluctuations. After all these cuts and losses, we had implementation of the Operational Window Change (OWC) in January 2015. This process resulted in service declines from which the Postal Service has yet to recover.

There is some good news in the list of these years of postal struggle. During 2015 to 2019, the data reported by the Postal Service to the Feds Data Center, a service from FedSmith.com, show some job growth. This growth is by way of USPS Headquarters’ Postal Career Executive Service (PCES) and Pay Band employees. The database lists these two categories as increasing over 300 positions.

I must make a disclaimer here that this data supplied by the USPS to FedSmith may not be 100 percent accurate regarding new positions. I presume the information being provided by the USPS is based on current employees on the rolls and does not include vacant positions.

This also could be the case for the numbers of positions that appear in 2019, but not 2015 (see chart below).

Someone mentioned to me a statement made by the late PMG Marvin Runyon that any job that did not touch the mail was a possible target for elimination. I thought former PMG Pat Donahoe made that statement. Either way, it appears that USPS Headquarters Support positions continue to grow, while boots-on-the-ground leadership positions that impact the ability to keep America’s mail moving are continually declining.

As I stated in my disclaimer, the positions listed below may not be new USPS Headquarters positions, such as the new vice president, Processing and Maintenance Operations, which was announced Aug. 22, 2019. However, it appears there is job growth at USPS Headquarters, while cutting the way to sustainability at the field level continues.

While NAPS applauds any subsequent EAS position that may be created in support of these PCES and Pay Band executive positions, looking at this data could lead someone to ask, “What is being sustained?” 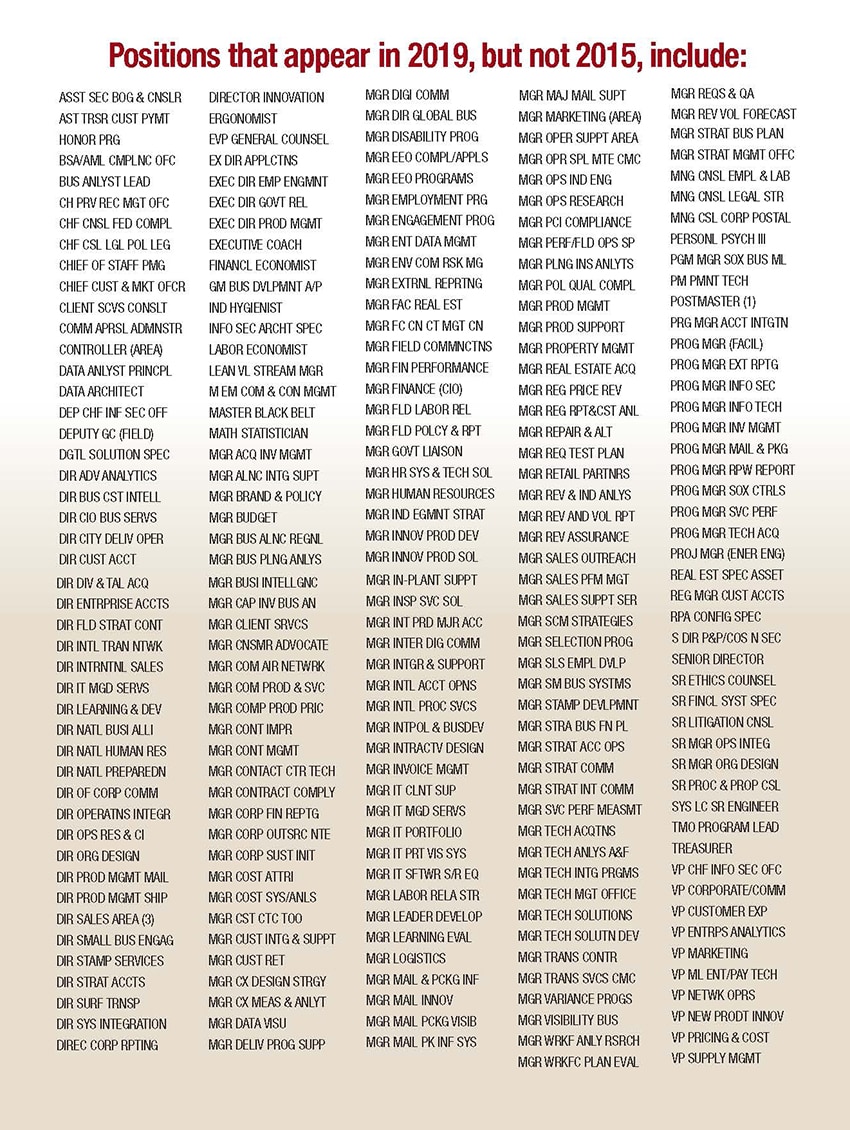