The 100th California State Convention and 87th California Auxiliary was called to order Thursday, April 21, at the Croque Hotel in Solvang, CA. Dubbed the “Danish Capital of America,” Solvang is a beautiful little city with a Danish-themed village design. This was the first opportunity in two years for California to host a state convention. Over 100 NAPS and Auxiliary members and guests celebrated 100 years of California State NAPS.

The host branch was Mary Burkhard Branch 244. This was the first time for the branch’s newly elected officers to host a state convention; they did an outstanding job.

Branch 244 President Ed Moore welcomed guests and introduced Rep. Salud Carbajal (D), who represents California’s 24th District. Carbajal is a strong supporter of NAPS and the Postal Service. He voted for H.R. 3076 and is a cosponsor on other important NAPS-endorsed legislation concerns. 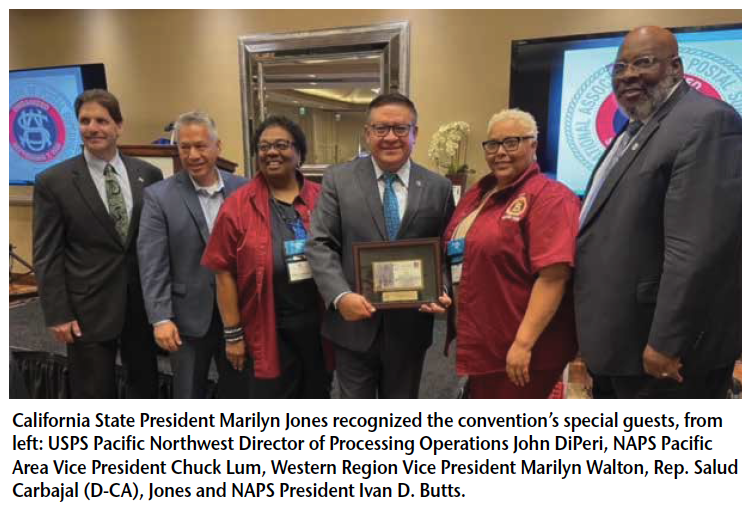 The business session ended at noon so attendees could celebrate the 100th anniversary with a special cake and photo opportunities. The rest of the first day was devoted to NAPS/USPS training. Former NAPS Secretary/Treasurer John Aceves provided training on ELM 650, SWCs and related topics.

Chuck Lum and I joined in the training and provided information on the state of NAPS business. We want to thank the California State Board for taking time out from convention business to allow time for important NAPS training and extending an invitation to all Pacific Area and California NAPS members and nonaffiliated members.

On Friday morning, convention business resumed. We want to thank John DiPeri for returning to hear the concerns of members. There were many concerns shared, including how EAS employees are treated in the workplace, staffing concerns, excessive workloads (what to do first to stay off the list), Zoom meetings taking up supervisors’ and managers’ time and EAS employees being assigned craft work. DiPeri committed to sharing members’ concerns with his peers and challenged us to continue to meet and sustain a dialogue at the local level, but also elevate unresolved issues to the next level.

There were reports from 12 committees: Audit, Registration, Rules, Constitution & Bylaws, Compensation, Working Conditions, Formal, Postmasters, Legislation, Greetings, Sergeant-at-Arms and Ballot. All the committees reviewed resolutions or met and determined issues and concerns important to all EAS employees. The resolutions adopted were all for California.

One resolution established $500 memorial scholarships in honor of Tom Wong, Mary Burkhard, Bridget Evans and Hayes Cherry. The scholarships will be awarded annually to a member, their child or grandchild.

It would not have been a California State Convention without a Debbie Baker and Sam Booth Jr. Greetings Committee production. This year’s theme was NAPS Superbowl. We had 24 first-timers participate and, of course, the national officers and Auxiliary members joined in to perform California’s version of the Super Bowl 2022 halftime show. We had impersonations of Kendrick Lamar, Snoop Dogg, Dr. Dre and Mary J. Blige. Ivan did a great impersonation of “Fifty Cent!” 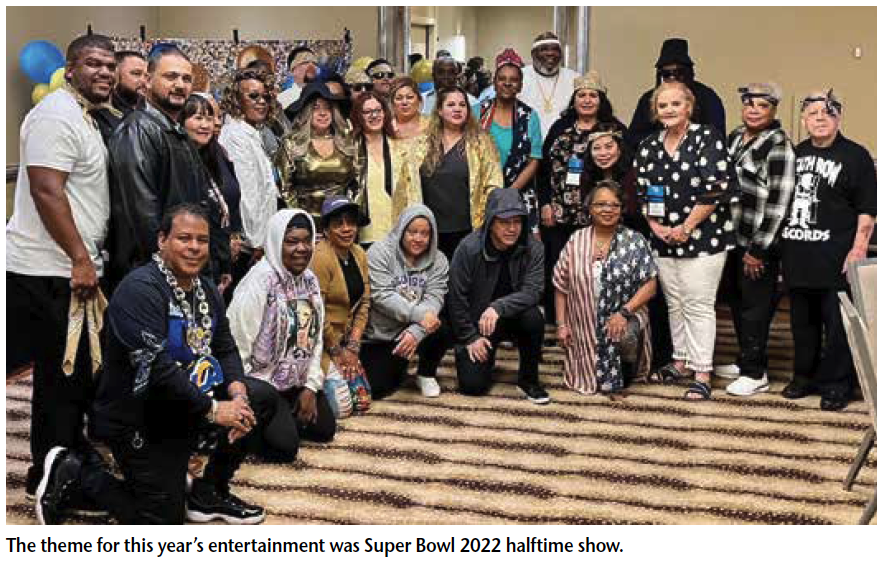 The Auxiliary conducted its 87th Convention and elected its new state board led by President Yunina Graham, San Francisco.

NAPS branches, members and the Auxiliary went all-in on SPAC fundraising. There were gift items, hundreds of dollars in gas and store cards, branch challenges and 50-50 raffles; the goal was $100 per attendee. We exceeded our original goal of $7,000 with a final tally of $13,310 for SPAC. A special thanks to outgoing Legislative Chair April Trevena and incoming Legislative Chair Felica Pennington.

There were a lot of activities packed in the three days of celebrations, training, adopting important resolutions and elections. We welcomed back Fresno Branch 274 members; they now are members in good standing.

A special thanks to all the members of Mary Burkard Branch 244 and all first-timers for hosting an outstanding convention in beautiful Solvang.

Visiting Anchorage, AK, Branch 435 was a great experience for me and Northwest Area Vice President John Valuet. USPS Alaska District managers took time out of their schedules to be with us and Branch 435 President Pam Melchert. There were no significant local NAPS issues as Pam and her NAPS team make every effort to resolve issues locally.

We had an enjoyable conversation on the unique challenges of processing, transporting and delivering the mail in Alaska due to the many isolated areas that require air transportation. The managers said they are able to keep the mail flowing throughout Alaska and the lower 40 with a committed team. They also share they have some newly promoted supervisors to help the district achieve their goals.

Branch 435 hosted us at its bi-monthly meeting; members were eager to hear the latest news from NAPS Headquarters. John and I answered a list of questions dealing with the new postal reform legislation, NAPS’ lawsuit and updates on EAS upgrades as a result of the recent restructure.

We assured everyone NAPS is continuing to work on behalf of all members and they should feel free to share their questions. We pledged to make every effort to keep communication flowing to members.

We had a lively, engaging meeting; four of the five newly promoted NAPS members attended the meeting. We had a wonderful time in Alaska: warm hospitality, fellowship, information-sharing and great food!