The Unbalanced Scales of Justice

In some pictures of Lady Justice, her scales are unbalanced. The meaning of the symbolism depends on the context.

Under certain circumstances, the unbalanced scales are said to represent weighing the merits of one side against the other, with the understanding a fair judgment will give credence to one set of facts over another. Other times, unbalanced scales are used as a political commentary to indicate an opinion that a particular ruling or law unfairly favors one side over another, or to suggest one argument is significantly stronger than another.

My column this month agrees with the latter interpretation in regard to ELM 650 hearing processing. ELM 650 is the only source of justice for approximately 7,500 EAS employees who do not have MSPB rights due to not fulfilling the supervisory requirements or, possibly, the one year in a like or similar position.

Traditionally, the scales are shown in balance, usually when they are held by Lady Justice (or Justitia, from the Roman goddess). This symbolizes giving fair and objective consideration to all evidence, without showing bias one way or the other.

However, the ELM 650 process is an aberration in the USPS that is neither fair nor objective. This is the first action by the USPS when these EAS employees request to use the only process available to them to adjudicate their affirmative defense of allegations being made. The Step 1 official assigns a neutral hearing officer within 10 calendar days of receipt of a request for a hearing.

The very fact that the ultimate decider of the alleged action is the same body that chooses who hears that case provides the opportunity for biased behavior. It is this opportunity that is the root cause of bias in the process: judge.

We have been told in the past how dangerous this process is for EAS employees. However, over the past year, I have been tracking data that helps illustrate this point. I must point out that the number of cases that go through the ELM 650 hearing process pales in comparison to the number of MSPB cases for which NAPS advocates on behalf of its members. However, the results show a disparity difference.

Calendar year (CY) 2018 data for NAPS MSPB cases show we have represented members in 106 (147 total, with 41 pending) MSPB cases. NAPS either won, settled or achieved withdrawal of 54 of those cases, for an 83 percent success rate (see MSPB graph). The NAPS success rate advocating for EAS employees is almost equal to the total success rate for all agencies who took actions against federal employees in MSPB cases (89 percent) in CY18. 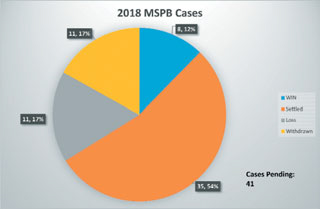 When we look at the results of CY18 in the ELM 650 hearing process, we see something a little different. Taking into consideration that there is a difference in the number of cases that use this process, the results still validate this process is not fair and objective in giving due process to EAS employees who do not have MSPB appeal rights. 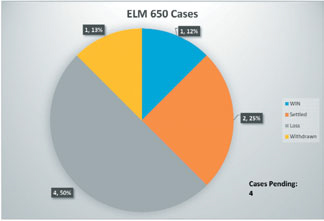 NAPS, with the legislative leadership of Rep. Gerry Connelly (D-VA) and original co-sponsorship of Rep. David McKinley (R-WV), continues to pursue the full inclusion of all EAS employees in the MSPB process by supporting H.R. 597, the “Postal Employee Appeal Rights Amend-ments Act.” Passage of this legislation would provide the due process needed to balance the scales of Lady Justice with fair and objective considerations.