Learn how to better express yourself by using the proper format to write your national convention resolutions.

That’s well and good, you may be thinking, but how do you write a resolution? That’s what this article is about. Let’s call it Resolutions-Writing 101.

You’ll soon discover that writing simple, effective resolutions everyone can understand is not all that difficult if you keep a few pointers in mind.

So let’s get started.

Before you begin putting your thoughts in “whereas” and “resolved” resolution form, write down—in a short sentence—the action you’re requesting. This later will form the basis of the “resolved” of your resolution. Don’t give all the reasons (“whereases”) just yet why you want the action to be taken. We’ll get to all that in a moment.

Let’s come up with a sample resolution that will request an action to be taken; in this instance, one by family members. The same basic thought process will apply to any NAPS-related resolution you may later write.

At the dinner table one evening, family members decide they need to get a dog. That “action,” in a short sentence, might read: “The Smith family needs to get a dog.”

Well, what do you know? We’ve almost put together a simple resolution! All we have to do now is state everything in resolution format, using
“whereases” and “resolveds.”

Whereas, A dog would be protection against intruders, and

Whereas, A dog would be a loyal, loving family companion, and

Whereas, A dog would be a reason to get off the couch and get more exercise walking, now therefore be it

Resolved, That the Smith family needs to get a dog.

Resolved, That the Smith family needs to get a dog, and be it further

Other resolution-writing pointers to keep in mind are:

Here’s to writing simple, more effective resolutions for consideration at our 67th National Convention, Aug. 17 to 21, at the Gaylord Texan Resort, Grapevine, TX. 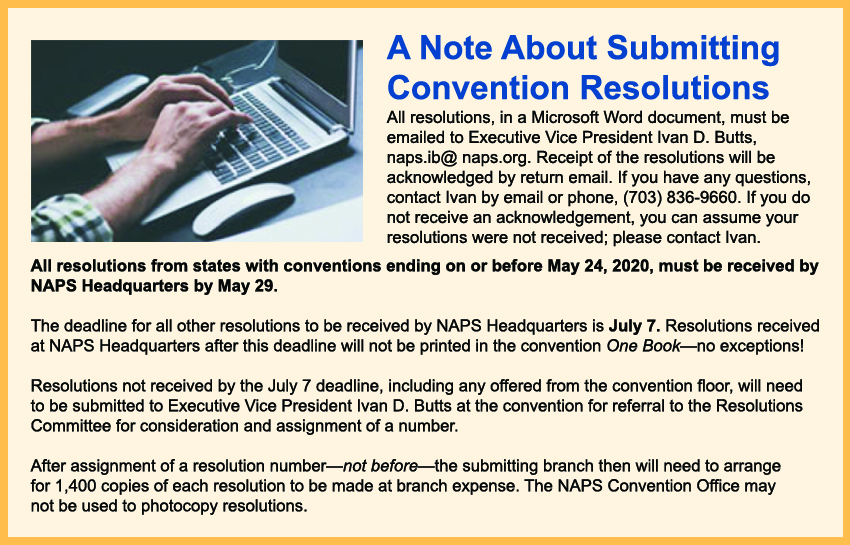