NAPS' DDF Is Your Best Defense

The adage “The best defense is a good offense” has been applied to many fields of endeavor, including games and military combat. It also is considered the strategic offensive principle of war. Generally, the idea is that proactivity (a robust offensive action), instead of a passive attitude, will preoccupy the opposition and ultimately hinder its ability to mount an opposing counterattack, leading to a strategic advantage.

I apply this adage to NAPS’ Disciplinary Defense Fund (DDF) advocacy. On May 30, 2019, NAPS completed its first full fiscal year of advocacy under the leadership of the Labor Relations Admin Group LLC (LRAG). After decades of fee-free advocacy for NAPS membership provided by Scialla Associates, headed by Charlie Scialla, NAPS made the transition to LRAG effective Jan. 1, 2018.

Headed by Al Lum, LRAG has implemented a smooth transition in advocating for NAPS members. Our advocacy has been strengthened through the addition of several advocates who have tremendous knowledge, skills and abilities in USPS policies and procedures and advocacy. Al has made himself available to NAPS members via phone calls and emails, as well as at NAPS training seminars throughout the country.

This level of advocacy has allowed NAPS to remain proactive in presenting an affirmative defense for its members. What also helps in this effort is the excellent work being done by local NAPS advocates in cases at the initial level. You are making my battle cry in advocacy a reality—that is document, document, document. The better the level and quality of documentation you submit with your cases puts NAPS in the most advantageous position to have a positive result from the DDF process.

So, let’s look at the numbers from NAPS’ FY19 regarding DDF. For tracking purposes, NAPS’ fiscal year runs June 1 through May 31. For FY19, the NAPS DDF provider represented members in 114 total cases. The “NAPS FY19 Total DDF Cases” graph identifies 75% (85) of those cases were designated for MSPB, 20% (23) cases were assigned to DCA and 5% (six) cases were assigned to the ELM 650 hearing process.

Yearly, cases heard in the ELM 650 hearing process are the smallest part of NAPS’ DDF effort. However, they are the costliest—career-wise—for those members who do not have MSPB appeal process rights. Despite this, in FY19, NAPS settled 60% (three) of these cases. 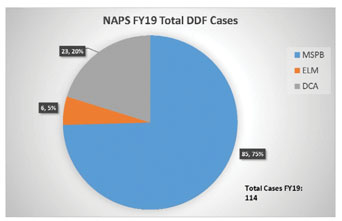 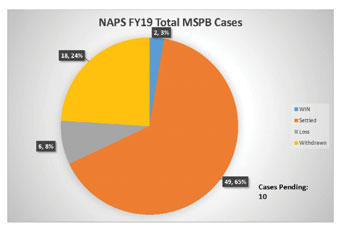 In the MSPB arena in FY19, NAPS brought 75 cases before the administrative judges overseeing this process. I want to point out this is the average number of cases quoted to NAPS by Charlie Scialla (see “NAPS FY19 Total MSPB Cases” graph). De-spite NAPS’ overall success in representing members with an 8% (six) loss rate compared to the approximately 82% loss rate across all appellants—all agencies going before the MSPB courts—NAPS continues to see a reliable and robust DDF in fighting for its members.

I have heard comments about the cost of NAPS’ DDF versus other associations’ costs doing similar work. So, for the record, in FY19, NAPS represented EAS members in 114 various DDF cases at an average cost of $2,475 per case, paid by NAPS. So, despite the changing times and changing our DDF provider, NAPS continues to provide 100% free representation to its members through the NAPS DDF.

The last area of data I would like to summarize is the types of cases (see “DDF Case Types” chart) being alleged by the USPS against NAPS members in the field of MSPB. The chart speaks for itself regarding those allegations. 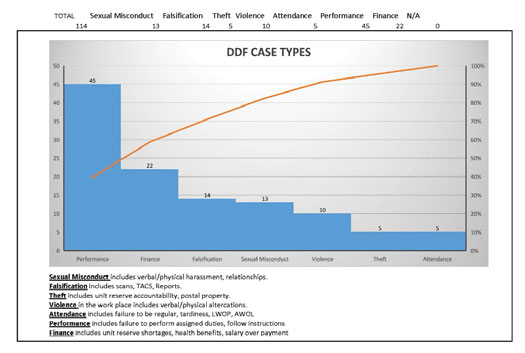